By ctcadmin2 on August 5, 2014 in Completed Projects 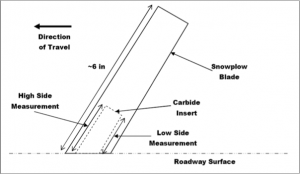 State DOTs use several thousand carbide blades in a single winter season. Carbide inserts used in snowplow blades are often replaced too early or too late during snow removal operations, resulting in wasted materials and money and possible plow damage.

The goal of this project was to develop testing procedures for carbide inserts that would give agencies a better ability to predict performance of the carbide inserts used in snowplow blades for snow removal operations.

The project identified lab tests that demonstrated that inserts showing flaws in the lab also had the poorest performance in the field. The final report included recommendations for developing a national standard for everyone to use, so that manufacturers can focus on making one type of carbide blade and shape. It also included a purchasing approval framework and specification, which has the potential to save DOTs money.