AASHTO Subcommittee on Maintenance Annual Meeting
The American Association of State Highway and Transportation Officials Subcommittee on Maintenance will hold its annual meeting July 19-23 in Des Moines, Iowa. The meeting will include paper presentations, an update on Clear Roads by new Clear Roads Chair Justin Droste, technical working group breakout sessions, networking opportunities, an evening at the Iowa Speedway, and a banquet. Details. 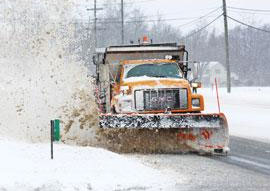 Shed Tackling: VTrans Looks at Issue Dealing with Salt Locations
Vermont Agency of Transportation has developed a Snow and Ice Control Plan with the objective of achieving “safe roads at safe speeds,” rather than bare roads, to make the most efficient use of state resources while allowing the roads to remain travelable. A February 6 Roads & Bridges article describes the plan and its development in partnership with the University of Vermont Transportation Research Center. The center conducted a study of optimized plow routing in 2013 to reduce material waste and create more efficient plow routes, which led to a new research project to more efficiently locate salt sheds around the state (see the summary below under “Research Reports”). Details. 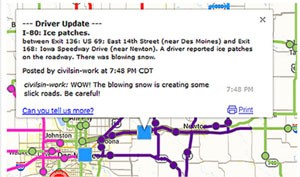 MnDOT Tests Crowdsourced Road Condition Reporting
Minnesota DOT’s Regional Transportation Management Center has launched a Citizen Reporting system that will allow motorists to update winter weather road conditions on the state’s 511 travel information system. MnDOT maintenance crews currently report road conditions, but reports can become outdated quickly, particularly on highways that aren’t plowed frequently or that lack traffic cameras. The new reporting system is currently open only to MnDOT employees, but the RTMC hopes to open it to the public in time for next winter. Details. 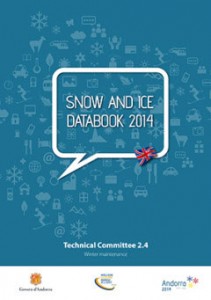 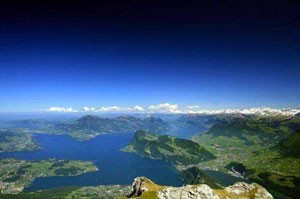 Salt Guideline Revisions Urged
A York University study recommends changes to Canadian road salt guidelines to protect aquatic life. An April 9 Phys.org story reported that the study found that water fleas were more sensitive to chloride in environments when they had less food. As a result, the researchers suggest that lakes near winter-maintained roads that have low nutrient levels are of particular concern. Details. 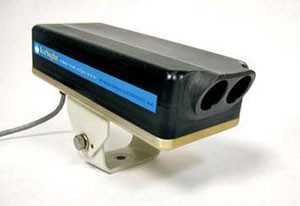 Mobile Road Condition Monitor Testing in Minnesota
Three of Minnesota DOT’s districts are testing mobile road condition monitors that can detect hazardous ice, snow, or wet conditions. Maintenance crews hope the devices will help determine the right time to apply salt during plowing, reducing the use of salt when it isn’t needed. The districts are testing two infrared devices and one monitor that uses gravitational force to determine road surface friction. Details. 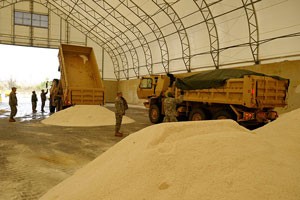 Ontario Good Roads Association Seeks Road Salt Claim Limits
The Ontario Good Roads Association is working to protect municipalities against nuisance damage claims due to road salt. OGRA is seeking a provision in the Ontario Municipal Act similar to ones that protect municipalities against nuisance complaints when sanitary sewers back up in basements during storms. The move is in response to a January Ontario Superior Court decision awarding more than $100,000 to farmers due to crop losses and depreciated land value stemming from a Lambton County’s use of road salt in winter maintenance. Details. 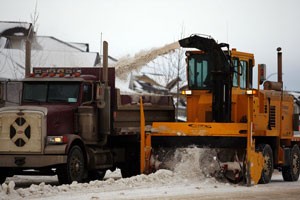 City’s Snow-Removal Program Gets Thumbs-Up
The city of Grande Prairie, Alberta, experienced success with a new snow-removal schedule that reduced resident complaints despite having a winter with above-normal snowfall. As described in an April 28 Grande Prairie Daily Herald-Tribune article, the city’s strategy includes plowing residential neighborhood roads the day before the area’s garbage collection. A community safety committee endorsed the strategy to continue next year. Details. 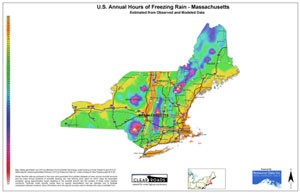 Establishing Effective Salt and Anti-Icing Application Rates
Clear Roads Project 12-02
This project sought to update guidelines for anti-icing and deicing agent application rates developed in FHWA TE-28 and NCHRP Report 526, based on formal and informal testing and field experience. The project found, however, that the state of the practice has not changed significantly since the publication of NCHRP Report 526 and that those guidelines are still relevant.  Report.

Strategic Location of Satellite Salt Storage for Roadway Snow and Ice Control in Vermont
Vermont Agency of Transportation Report 2015-01
Roadway snow and ice control operations can account for up to 10 percent of Vermont Agency of Transportation’s annual budget. This project examines the use of satellite salt facilities and developed a novel approach for locating these facilities, as well as a method for ranking the effectiveness of individual facilities with respect to how much they reduce the distance vehicles must travel to reload salt. The project identifies optimal locations for satellite salt facilities in each of the state’s existing service territories.  Report. 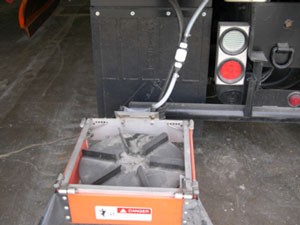 Development of Chloride Reduction Training
Illinois Center for Transportation Project 15-010
This project created a training program for Illinois DOT winter maintenance personnel and a method to measure the effectiveness of the training. The training concentrated on how salt breaks the bond between snow and pavement, the importance of pavement temperature, the need for pre-wetting road salt and the concern for level of service. To measure training effectiveness, IDOT compared salt usage and a storm severity index to determine whether training reduces salt use when normalized over winters with differing weather conditions. Report. 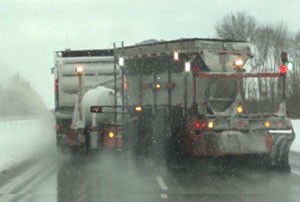 Evaluation of the Viking-Cives TowPlow for Winter Maintenance
Ohio DOT Report 2014/16
The TowPlow, a trailer unit capable of plowing and applying deicing materials over two lanes in a single pass, is one method state departments of transportation have implemented to reduce winter maintenance expenditures. This project evaluated the efficiency of the TowPlow versus standard trucks, finding that the TowPlow is as effective as 1.7 standard trucks, and produced average annual cost savings of $17,828. Report. 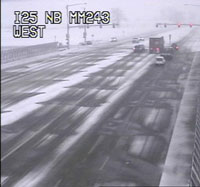 Fixed Automated Spray Technology: Current Practices and a Case Study
TRB Annual Meeting Paper 15-1577
Fixed Automated Spray Technology systems are designed as a technology for anti-icing operations at specific target areas such as bridges, tunnels, ramps and other elevated roadways. This project synthesized information on the state of the practice of FAST systems obtained from agency surveys and a field investigation. It found that every installed FAST system reported needing significant maintenance for successful operation; that inconsistent system functioning can be caused by poor design, installation or maintenance; and that noninvasive technology may help improve FAST technology reliability.  Report. 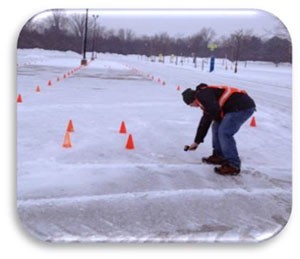 Field Evaluation of Organic Materials for Winter Snow and Ice Control
TRB Annual Meeting Paper 15-4555
While road salts are effective for snow and ice control, high concentrations of salts are detrimental to the environment and corrosive to vehicles and infrastructure. Alternative deicing and anti-icing products are becoming increasingly available, but there is limited information available on the performance of these products. This project included approximately 600 tests of the effectiveness of three liquid organic and semi-organic alternatives to regular road salt (Fusion 2350, Snow Melt and Caliber M1000) over 35 test days. Performance of these alternatives was mixed relative to salt brine, although the tests found that application rates as low as 3 liters/1,000 square feet could be recommended for anti-icing in parking lots or low-volume roads, regardless of the material being used.  Report.

Effectiveness of Liquid Agricultural By-Products and Solid Complex Chlorides for Snow and Ice Control
TRB Annual Meeting Paper 15-5815
Agricultural-based products and complex chlorides/minerals-based products are increasingly used alone or as additives to chloride-based products for snow and ice control. The specific role of these products in snow and ice control is poorly understood. This project conducted a systematic laboratory investigation that focused on the thermal properties, ice melting behavior and corrosivity of four agricultural-based deicers and two complex chloride/minerals-based products. Among the project’s observations are that the agricultural-based additives may inhibit freezing but do not improve ice melting capacity, and that they appear to reduce the corrosivity of salt brine on carbon steel.  Report.

The Temperature Dependence of Solution Induced Weakening of Compacted Snow
TRB Annual Meeting Paper 15-1279
While the melting capacity of different deicing agents has been studied at different temperatures, the temperature dependence of the anti-compactive effect of liquid solutions on snow is not well understood. This research evaluated the effect of salt brine on snow compaction at 28°F, 21°F and 1°F. It found that the solution had a softening effect on compacted snow at all temperatures, although at 1°F the softening effect was visibly reduced.  Report. 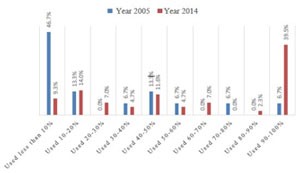 Safety Effects of Fixed Automated Spray Technology Systems
TRB Annual Meeting Paper 15-0756
This research evaluated the effect of Fixed Automated Spray Technology systems on crash frequencies at 21 sites in Colorado where they have been installed for at least two years. Crash statistics found that FAST systems contributed to an annual crash reduction of 2 percent on multilane rural highways, 16 to 70 percent on urban interstates, 31 to 57 percent on rural interstates, and 19 to 40 percent on interstate interchange ramps. However, some sites experienced an increase in crashes, potentially due to increased traffic, improper maintenance, or improper fluid application.  Report. 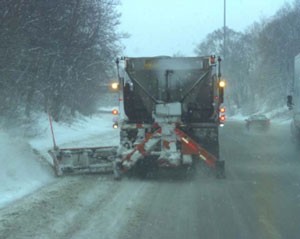 Assessing the Use of Willow Shrub Species on Living Snow Fence Designs to Manage the Damaging Effects of Salt
Road deicing salt is washed into roadside ditches that can carry it into the watershed when snow and ice melts. Both chloride concentrations and the number of water bodies listed as impaired by chloride are growing in Minnesota. Living snow fences are one technique for reducing the amount of salt needed to clear roads by trapping blowing snow. This study is attempting to assess the potential of both native and hybrid willow shrubs as living snow fence systems. Abstract.