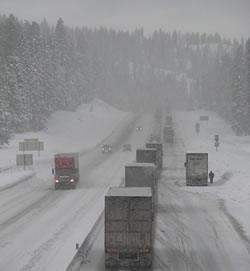 Michigan, Minnesota, and Nevada are testing hundreds of plows with custom sensors that continually measure road and weather conditions. The Pikalert Enhanced Maintenance Decision Support System, built by the National Center for Atmospheric Research, combines sensor measurements with satellite and radar observations and computer weather models to help agencies identify stretches of roads where there are dangerous conditions. If the system passes key tests, it will be transferred to private vendors and be available to additional states in time for next winter. Article. 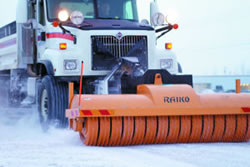 Since November 18, Alaska DOT has been testing an experimental icebreaker tool in Fairbanks, Anchorage, and other areas of the state, according to the Fairbanks Daily News-Miner. The icebreaker is a 3,800-pound wheel, with rows of metal spikes, that attaches to the front of a plow truck like a snowplow. The spikes break up the ice, allowing a plow to move loose pieces from the road. Article. 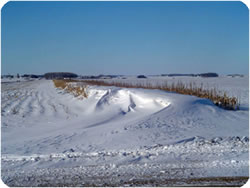 Minnesota DOT has developed a new web-based calculator that generates cost-benefit analysis reports to help set reimbursement rates for landowners who create living snow fences. The CTS Catalyst reports that MnDOT is using the tool this winter to determine where to add standing corn row snow fences near Gaylord, where blowing and drifting snow is a significant problem. MnDOT will make the tool available to other transportation agencies in Minnesota and around the country and world next fall, and will conduct outreach workshops to demonstrate how to use it. Article. 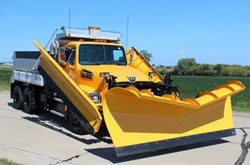 A December 2013 AASHTO press release highlights several of the innovative technologies that state departments of transportation are evaluating during the 2013-14 winter for their effectiveness in maintaining roadways. Among these efforts are Nevada DOT’s “Integrated Mobile Observation” demonstration project, which deploys 20 plows and trucks to report road conditions by radio rather than cell phone to improve reliability in rural areas; Tennessee DOT’s test of a potato juice-based deicer; an expanded fleet of dual-wingplows in Maryland; and live road monitoring networks in Utah and California. Press Release. 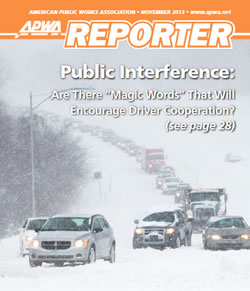 Asotin County, Washington recently installed roadside reflectors near steep grades that turn blue when the area gets below freezing. The reflectors are intended to help drivers know when conditions are right for the formation of black ice, a common cause of accidents. Article.

Westmount, Quebec, has installed cameras on the back and right-hand side of its winter maintenance vehicles and other large trucks. CBC News reports that the cameras supplement side guard rails that were installed after a pedestrian was killed by a turning snow-removal truck in 2005. The cameras and installation cost about $1,000 per truck. Article.

Virginia DOT and Iowa DOT have created online maps that show residents where snowplow crews are operating and which streets have and have not been plowed after a storm. These maps are updated every few minutes with current road conditions. Many cities, such as Ann Arbor, Michigan, have created similar maps on a local scale.

The Winnipeg Sun reports that the city plans to test a mix of granite and sand for winter road maintenance this year. The city hopes that the harder, more angular granite chips will embed into snow pack on the roadway and help traffic break the snow down more efficiently. Article. 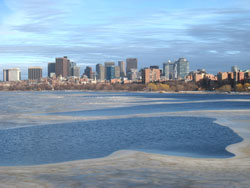 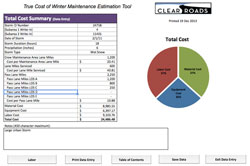 Researchers developed the True Cost Tool, which allows users to analyze and compare winter maintenance costs. The tool will help transportation professionals better understand and communicate costs and perform what-if testing to see how changes to certain variables will affect costs. The researchers also recommended which data winter maintenance agencies should be collecting to better link their costs to the level of service they provide. Report.

A Comprehensive Analysis of the Association of Highway Traffic with Winter Weather Conditions
2nd Conference of Transportation Research Group of India, December 2013 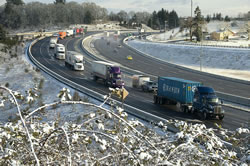 Using hourly traffic data from 350 permanent traffic counter sites and six weigh-in-motion sites, as well as weather data from 598 weather stations in Alberta, Canada from 1995 to 2010, researchers investigated the impact of various combinations of cold and snow intensities on passenger car and truck traffic levels. Each centimeter of snowfall reduced traffic volume by 1% to 2% when the temperature is above 0ºC, with additional reductions of 0.5% to 3% per centimeter during severe cold. Report.

Ohio DOT evaluated the Epoke Bulk Spreader, which is capable of applying salt and brine over multiple lanes in a single pass. The research found that the spreader reduced salt usage by 12% in deicing applications and also saved labor, leading to an estimated payback period of 8 years, assuming 20,000 tons of salt is used annually at a cost of $40/ton. Benefits were less pronounced for anti-icing applications. Report. 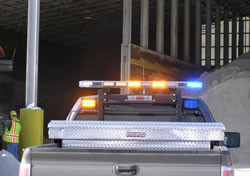 Using an automated surveillance system permanently installed at an intersection in Goodhue County, Minnesota, researchers tested the effect of seven different warning light configurations on the behavior of drivers as they passed a patrol vehicle parked in the right shoulder. Full-width warning light bars, additional lower lights, and a combination of blue and amber lights were each factors that made drivers more likely to switch to the left lane when passing the patrol vehicle; 99% of all drivers used the left lane to pass the vehicle when its warning light configuration included all three features. Report. 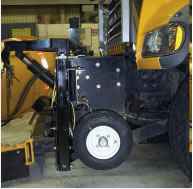 This research developed and tested a snowplow-mounted road friction measurement system. The system, which consisted of an instrumented wheel mounted near a snowplow’s front axle and an algorithm to compensate for vibration from the snowplow, successfully detected slippery patches in preliminary tests. However, bearings in the pivot that raises and lowers the wheel failed in field tests for both the original model and a reinforced version. Report.

Backup warning devices were evaluated to determine if they successfully alerted tow plow drivers to obstacles behind the trailer and out of the driver’s view. The system did alert drivers to items behind the unit, and there were no backup accidents reported during the research period. However, there were reports that the system was not completely waterproof, and salt brine caused one sensor to fail. Report.

Many papers related to winter maintenance were presented at the 2014 Transportation Research Board Annual Meeting. Clear Roads has released its annual overview of these papers, including abstracts, author contact information, and links to each paper. (TRB requires a login to access full papers, which is free to TRB Annual Meeting attendees and available for purchase to others.) Report.